To put it simply, PC, UPC, and APC refer to the polish styles of the ferrules inside the fiber optic connectors, just as the following figure shows. The ferrule is the housing for the exposed end of a fiber, designed to be connected to another fiber, or into a transmitter or receiver. When connectors are installed on the end of a fiber, light is reflected back up the fiber towards the source, disrupting the signal. To increase the efficiency of fiber, engineers began to upgrade the surface of the critical point of attachment, and that’s how ferrule polish technologies are introduced. There are four connector polish types, three of which will be highlighted below.

UPC is the acronym for Ultra Physical Contact. It is an improvement of the PC fiber connector with a better surface finish after an extended polishing and the return loss is better than PC structure, nearly -50dB or higher. Though it has a relatively lower back reflection in comparison with the PC connector, it is not robust enough. Note that repeated connections and disconnections will bring about the degradation of the surface and ultimate performance.

Out of the pursuit of lower back reflection, APC fiber connectors were developed. APC refers to Angled Physical Connect, the ferrule endface radius of which is polished at an 8°angel, minimizing the back reflection as a result. Since adding the angled endface, the reflected light will leak out into the cladding instead of staying in the fiber core. It should be noted that APC connectors should only be mated with other angled-polished connectors rather than non-angled polished connectors, or it will cause very high insertion loss. The optical return loss of APC connectors is -60dB or higher, better than the other connector types.

PC vs. UPC vs. APC: What Are Their Differences?

After the definition of three connector types, you will find that PC, UPC, and APC connectors vary in many aspects. The following lists their differences in appearance, performance, and application categories.

The major difference in terms of appearance is the fiber endface. PC connectors and UPC connectors are both polished with no angle, though endface of UPC has a slight curvature. Instead, an APC connector is featured with 8° angle endface. 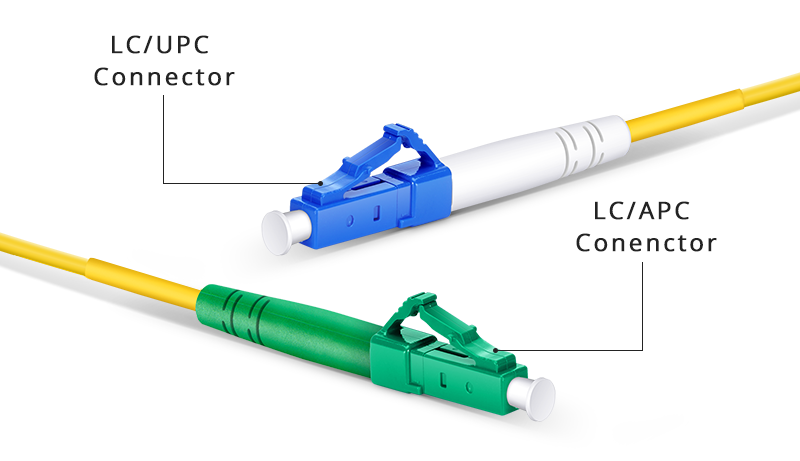 It used to be hard to achieve low insertion loss using APC connectors owing to the air gap in the apex offsets, yet nowadays the improvement of connector design and manufacturing push APC connectors to perform better. The insertion difference between APC and UPC has been diminished.

Since some applications are more sensitive to return loss, APC connectors are preferred in these fields, for instance, in higher wavelength range like those used for RF video signals, especially FTTx applications and for applications such as passive optical networks and other WDM systems using high wavelength via single mode fiber.

For those applications where return loss is not paid much attention to, UPC or PC comes into play. PC connectors are generally seen in telecom operators’ equipment, while UPC connectors are popular in digital TV, telephony and data systems.

It is improper to say whether PC, UPC or APC is the best polish type of fiber connectors. When choosing fiber connectors for specific applications, factors such as cost and operability should be considered. However, there is one rule that should be followed: for those applications which high precision optical fiber signaling matters, choose APC; for less sensitive digital systems, PC or UPC is capable.