VLAN (Virtual Local Area Network) is used to create multiple virtual LANs on a single physical interface. It is a layer 2 method that divides a single broadcast domain into multiple broadcast domains. So, proper VLAN planning can increase your network performance as well as network privacy.

There are various situations when you need to create VLAN in your MikroTik router. For example, if your ISP provides your WAN connection through a VLAN, you have to create a VLAN on your WAN interface or if you need to isolate your VIP users from other network users for any security purpose, VALN will be a better solution to isolate your physical network into multiple logical networks. 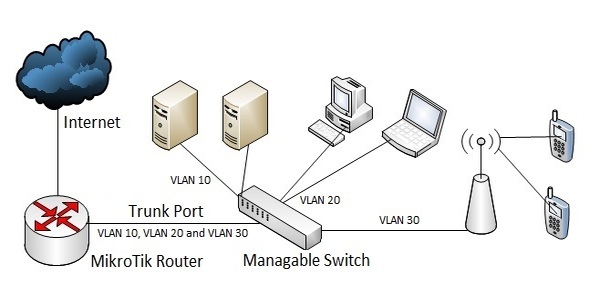 How to Create VLAN in MikroTik

VLAN can easily be created in MikroTik router like other network devices. Following steps will show you how to create VLAN in your MikroTik Router.

A new VLAN interface has been created. Similarly, you can create as many VLANs as you want following the above steps.

Every port in MikroTik Router is a layer 3 port by default and its keep in different broadcast domain. So, if you create a PPPoE server or a DHCP server on any interface, the service cannot be accessible from any other interfaces and other interfaces keep unused sometimes. If you want to use these unused interfaces and want to access your DHCP or PPPoE server from all the interfaces, you have to turn your layer 3 ports to layer 2 ports and bind them to a layer 3 logical port. MikroTik bridge feature has come for this purpose.

How to Create Bridge in MikroTik Router

If you face any problem to do above steps properly, watch below video carefully about MikroTik VLAN and Bridge Configuration. I hope it will help you to do the above steps successfully.

MikroTik VLAN and Bridge configuration has been discussed in this article. I hope you are now able to create VLAN or Bridge in your MikroTik Router if necessary.